If you are looking for something technical, this isn't the right entry. Today I wanted to write about one of my cats, Ostikka who left us some hours ago. 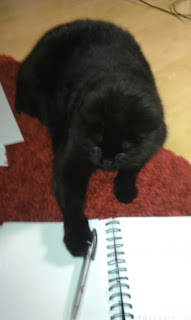 About two years ago my wife (Ansku) and I thought that we should get ourselves cats as we both love cats. We decided that instead of getting kittens like most people, we try to get some grown-up cats looking for a home. I asked my friend , Riku Voipio (who has 2 cats himself) and he told me that one of his friends, Mikko Tuomela was looking for someone to take his cats as he had to leave to US for education and couldn't take them with him. Soon we were introduced to these two very nice cats, Ostikka and Pentu. Ostikka was 12 years old at that time and Pentu was 8. While both cats are very social, Ostikka just loves to meet new people and isn't the least bit shy. He came to our lap immediately and asked to be scratched on his belly and purred. Pentu kept on hiding during our first "meeting" with him because he got spooked of someone peeking through the window earlier.

I must admit, at that time I was a lot more interested in Pentu than Ostikka. Not to say that I didn't like him but I wasn't as fond of him as of Pentu. Anyways in the end, we were given the honor of being the owners servants of these awesome cats. It wasn't long before Ostikka charmed me with his personality and soon I had a deep bond with him without even realizing it. Also I realized that not only he has a facebook page but has lots and lots of fans in there as well. Even people who had never met him in real life couldn't escape his charm.

Ostikka had medical problems right from the time he got him but nothing fatal. He mostly was supposed to follow a particular diet to loose weight. Even though old, he was a very happy cat who had a very positive attitude towards life.  Then came the Christmas week and he stopped eating and kept himself hidden. We consulted many vets but ultimately it took the best cat specialist in town (Teija Viita-aho) to find out what was wrong with him. I don't exactly know what the disease really is but something to do with pancreas being out of balance. We had a few weeks from hell where he had a tube attached directly into his oesophagus and we had to feed him every 1 hour through that tube. At that time both me and my wife had a full-time job so it was very difficult and many people at that time thought it it might be time to let Ostikka go but we managed to pull through and Ostikka sprang back to life soon.

We still had to give him meds twice a day but that was a very small price to pay to see him in good health and enjoying his life. More than an year later, Ostikka was still doing very well and Ansku even started to take him out every day the weather permitted. That is something he really loved to do. Many times he would go to the door and keep meowing, asking to be taken out. We took Ostikka for a routine check and they said we have been doing a very good job with him and we should keep it up. They also told us to come back after a few months for his dental care.

So a few months later, this cat seem to be still doing well but one thing we noticed was that he wasn't able to eat wet food (that used to be his favorite) and could only eat dry food. We take him to the vet for the dental care and another checkup. We had to leave him there for about 3 hours and when we came back to pick him up, the vet has a very bad news to tell us: He's likely to have a tumor in his intestines and unfortunately its incurable.

We took him home and hoped that coming lab reports will tell us that theory is not correct. We kept trying to contact the vet after that but she was way too busy to call us back. The only time she called was when I was in a meeting and somehow my phone never registered that call. A few days passed and in the meanwhile Ostikka's condition got worse after returning from the vet: He would hide away and not eat at all. Finally after a few days on a Saturday, the vet called Ansku and told her the bad news that lab reports are very much consistent with her theory. Based on that and the symptoms he had been showing lately, she insisted that he be put to permanent sleep on the same day.

We of course didn't like that idea at all and decided that we get a second opinion. We asked another vet, who does house calls, to come over and provide a second opinion. While she didn't offer a very different opinion, directly observing Ostikka she said there is no hurry to put him to permanent sleep. She asked us to keep observing him and try to get him to eat. This was on last Saturday (26.05.2012).

While observing, we did everything we could to make him feel good. The pain killers he was getting did help him for a few hours and enabled him to have some fun or at least try his best but since he still couldn't eat much. He kept on getting even weaker and didn't have energy to do much. It was very obvious that he was in a lot of pain most of the time. So yesterday, we both came to the conclusion that its time to let him go and relieve him of his pain.

Neither me nor Ansku could get any sleep last night. While Ansku had to go to work, I took a day off and remained awake to get an appointment from the vet to perform the euthanasia this evening and keeping Ostikka as happy as I could until his time comes. I fried/warmed him chicken every now and then as that's what he likes the best in food, took him outside for a walk, let him on the Balcony whenever he showed interest to go there and scratched him as long as he liked it. I also wept a lot. Here are some videos I recorded of him on his last walk outside (These videos won't probably be visible so if you are reading this on planet GNOME so if you are interested, please click the blog entry link):

Around 18:00, Mikko came and brought with himself a fish that somehow got Ostikka so interested that he wanted to eat it while it was still in the plastic wrapper. That was Ostikka's last supper and I'm glad that he really enjoyed it. Here is the video of him munching on the fish:

Then the vet came and did what needed to be done. It was a weird coincidence that Ostikka's brother, Kisu had died a few days ago (from a very different disease) as well. Mikko's mother has a small land reserved for pet burials so we took Ostikka's body there and buried him next to his brother: 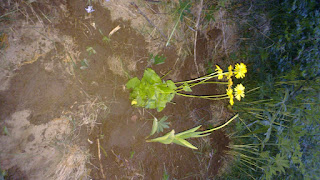 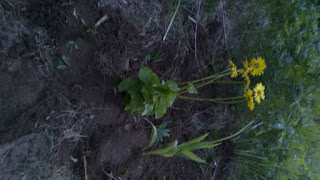 Since we wanted him wrapper around a clothe, my last gift to Ostikka was my GSoC t-shirt from last year.

It felt really really sad to come back to the house and only find one cat greeting us at the door. We go to the other room and keep expecting Ostikka to be there, starring back at us. It feels very very bad.. I really had no idea that I have fallen so much in love with this Feline.

P.S. I couldn't come-up with a good title for this post as Ostikka was so unique that nothing summarizes him better than his name. Unfortunately that is only understandable to people who knew him.