They say, a picture is worth a thousand words, so here is the gupnp-av-cp playing a song from my n81 on the coherence media renderer: 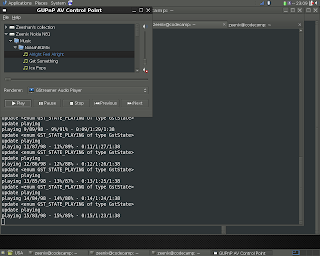 Many thanks to Frank Scholz and Visa Smolander for helping me in making sense out of UPnP specs, otherwise I still would have been confused on how to implement them. The CP is not yet ready but I will try to complete it before the end of the year 2007.

I would like to avail this opportunity to make it very clear to everyone that I have nothing against Coherence project and/or python, in fact I have been using Coherence myself extensively to test my GUPnP code. The reason people get the impression that I am against coherence/python is that I express the following reservations of mine regarding python, quite often and I end-up giving a wrong impression:

2. There is also the fact that when I would write (or support) a framework, I would like that to be equally attractive for all kinds of developers and the best way to do that would be to write it in C. That way, once I have the framework ready, I can provide wrappers for all kinds of languages, including python. OTOH, when writing an application, I might want to do it in python myself (assuming that I don't expect it to be used on embedded systems).

On a side-note, I have been talking about UPnP so much that Ansku recently had a dream in which someone was talking to her about it. :)
Posted by zeenix at 2:06 PM No comments: