Showing posts from September, 2008
Show all

Fire in the hole!

September 30, 2008
Many thanks to Olivier Crête , we now have a nice small library for firing holes through firewalls using a part of UPnP IGD API. This library also provides a convenient way to do all that without having to use a gmainloop. While Olivier will most probably use it in his farsight2 , I am sure this will be useful for other projects (I did not say Ekiga :)) as well.
1 comment
Read more

September 26, 2008
My last blog post managed to attract the attention of some of our beloved GNOME developers, especially the ones working on/with embedded systems. That made me realize that I am not (at least completely) on crack and decided to file a nice big bug for addition of something similar to GstMiniObject to core gobject library. Lets see what happens next. :)
Post a Comment
Read more

Think before you create GObjects

September 22, 2008
What a beautiful country. The people were very nice and the food was just amazing.
3 comments
Read more

September 13, 2008
After reading/watching Stuart's nice slides on Closures in the context of JavaScript, I have started to like JavaScript. Personally, I don't accept any language as a high-level scripting language if it doesn't support closures. Python is therefore straight out of my window. Although Vala isn't a scripting language, it would be nice to have such support in there as well. It already supports lambda functions with no restrictions and Jürg has concrete plans to support closures, it's more a matter of when rather than why or how. When that support is there, just try and stop me from loving Vala. :) UPDATE : Thanks to Anonymous, I now stand corrected that Python does fully support closures. Although I still don't like the fact that it restricts lambda functions to be one-liner but at least it's not straight out of the window anymore. :) UPDATE#2 : Andy Wingo informs me that python doesn't really fully support closures. He even put up a small code fragment
19 comments
Read more

September 08, 2008
Since I totally agree with last two blog entries of Havoc, I originally started to write this entry to get them to the planets I am on and he is not (yes, there are some) but then I couldn't resist adding my own thoughts. :) Regarding "embeddable" scripting languages, I came-up with the exact same conclusion 4-5 year ago. When I looked around at that time, I realized that GNU had realized that long time ago and had a nice embeddable implementation of the easiest yet powerful language, Scheme. Guile was the name of that implementation. I soon became a firm believer of "Most of the implementation in C, while the highest-level (only) logic written in Scheme/Guile". While I was acting on my belief, I couldn't help but notice that the only other person in the whole GNOME community that had similar vision was Andy Wingo. Many (if not most) had been going for Python. Some of them even took this scripting language as far as coding complete frameworks in it. A
Post a Comment
Read more 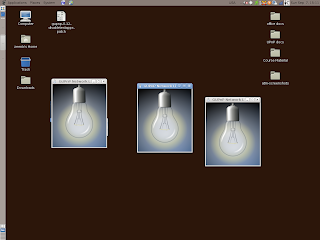 When I wrote GUPnP Network Light, I thought of it as just a simple example application that demonstrates how easy it is to implement UPnP devices and services using GUPnP. However there is one man, Mr. Hugo Baldasano Calleja who being an electrical engineer is very much interested in light bulbs and has recently been writing control point for Network Light. While discussing about his code with him on IRC , I started to wonder how would a simple control point GUI for Network Light look like. I realized that it would look exactly the same as the Network Light itself. Since Hugo had already made it possible for multiple instances of Network Light to co-exist happily on the same network/machine, I decided to turn Network Light GUI to be a Control Point that controls all the Lights on the network, not just itself. The change is already in the trunk and will be released soon. Here is a screenshot:
Post a Comment
Read more
More posts