For those who haven't heard the news yet, I'll be joining Red Hat UK and terminating my Red Hat Ltd, Finland branch contract starting Nov 1 2013. Naturally, I'll be myself moving to London soon along with my wife and cat.

I'm about to embark on a trip to Canada and US to attend Boston Montreal  and Google Summer of Code mentor summits and I'll return on Oct 22. Two days after that I fly to London to start the hunt for a decent apartment. Once I have an apartment, my wife and cat will come over as well.

Wow! Its been months since I last blogged. I have a good excuse and a bad one. The good one is that I've been extremely busy with trying to get some of things ready for GNOME 3.10. The bad one is that w/ me sharing all important events on all 3 major social networks, I don't feel too motivated to put all those into blog posts (yes, I'm very lazy).

As you probably already know, I've been working on Maps, geolocation and geocoding apart from Boxes in 3.9 development cycle. Although there is still a lot of work to do in all these, I'm really happy with what we achieved in a short amount of time:

All this would not have been possible without help from our awesome community. Special thanks goes to my Google Summer of Code students, Kalev Lember and Mattias Bengtsson, and my colleague and friend Bastien Nocera. For Maps, I was also very lucky to get help from an awesome new contributor, Jonas Danielsson. Maps wouldn't look any good without his work.
Posted by zeenix at 7:49 PM 6 comments:


Just like every year, I'm a mentor in Google Summer of Code 2013. This year I'm mentoring two students:

So I got two awesome students, what could be better? There is the coincidence that both of them are located in ̶G̶o̶t̶h̶a̶m̶ ̶C̶i̶t̶y̶ Gothenburg, the very same city where one of our designers, Andreas Nilsson lives in. Since Fabiana Simões (another designer) was visiting Gothenburg, Andreas saw an good opportunity for a hackfest and thats where I was at last week along with the rest of the Maps team. I'm glad to report that we got some stuff done: 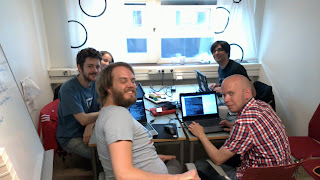 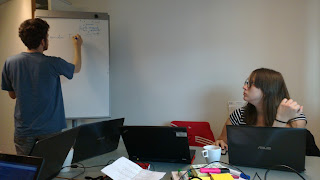 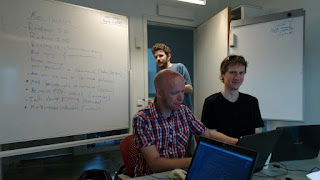 It was really nice to meet Mattias and Kalev in person and I finally had the pleasure of meeting Andreas Henriksson outside the Internets. There was also the GNOME Beers event and in general we did quite some team bonding. My only regret about last week is that that I didn't get around to do any sight seeing.

We just rolled out Boxes 3.7.92 and have now entered code freeze. This means that apart from translations and doc updates, Boxes is ready for the stable 3.8 release (due next Monday). So whats new you ask? Since Boxes 3.6, we have been hard at work, making Boxes an app that is so awesome that it makes you want to use virtual machines if you are not already. :) Boxes is now a lot more reliable, has improved and more impressive UI and has cool new features: 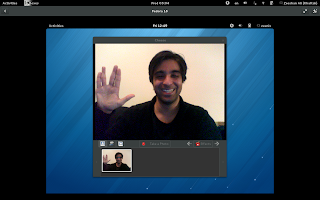 Here is a screencast of Windows XP with QXL in action.

Here is a screencast of new selection view in action.